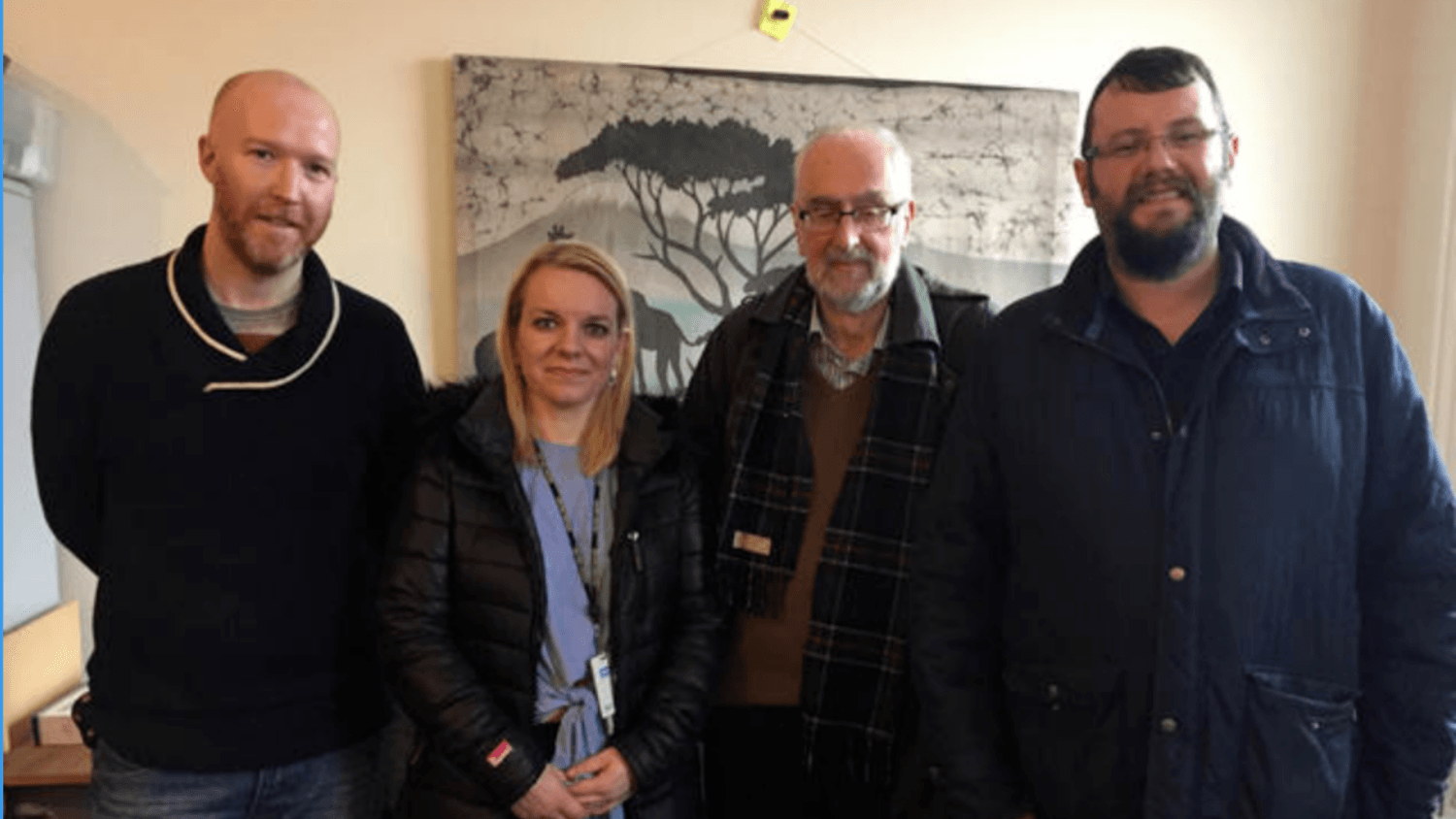 Homeplus NI, a Belfast based charity working with homeless people received £10,000 from the Community Foundation’s New Beginning’s Fund in 2016. We recently visited the charity on a ‘Seeing is Believing’ visit to find out how the funding helped with their work.

An amazing smell of cooking is the first thing that greets us as we make our way into the premises of Homeplus NI. It’s Friday, which means the South Belfast terraced house where the charity is based, is hosting lunch for the many refugees and asylum seekers which use its services.

Inching our way further into the building, people of all nationalities greet us warmly, peering out from every room to see the ten or so slightly rain-soaked delegation from the Community Foundation.

In the kitchen, lunch is nearly ready with dozens of plates waiting to be filled by four volunteers, clearly in possession of some very impressive culinary skills. They offer us a share of their food telling us it’s almost ready.

Homeplus NI was the first organisation in Belfast to provide a Street Outreach operation to Rough Sleepers every night of the year.  Over the last few years, it has also been providing services for homeless and vulnerable Migrant Workers, Refugees and Asylum Seekers. In 2016, the charity received funding of £10,000 from the Community Foundation’s New Beginnings Fund for organisations working with refugees and asylum seekers.

As we wind our way upstairs, we meet more people crowded on corridors and in rooms over all three floors. Sean from the charity shows us the room where donated clothes are kept before opening a closet like room where a weekly eye clinic is held – complete with spectacle frames and optometry equipment.

The charity has made use of every inch of the building – nothing is wasted; space, clothes, food; the contrast between the relative luxury that most of us take for granted in our daily lives brings the reality of life for Homeplus NI’s service users into sharp focus.

In an attic room which serves as the office for Homeplus NI, Sean and Ryan who run the charity begin telling us about their work and the impact our funding has had on the people they help.

It is a humbling experience as they tell us how grateful they are. We shift in our seats acutely aware that this is a charity which has maximised every last penny in the best possible way, scrimping here and there, using genius like strategies to ensure funding for salaries for the small number of staff. They have made £10,000 go a very long way indeed.

*Semira and *Nazim who use the charity’s services join us to share their stories. Semira left her native Somalia in 2009 thinking she was headed for America to join a family member, at least that’s what she was told by the people who arranged her journey.

Instead she found herself abandoned in a hotel in Dublin, with no idea where she was in the world and no money. Hotel staff called the police and Semira entered a nightmare she has been living in ever since.

She has subsequently learnt English and has spent the intervening years navigating the asylum system which has left her traumatised. “They can’t send me home as I technically have no country but they won’t let me stay either,” says Semira describing a stateless existence which sees her survive on meagre handouts.

Semira hoped to build a new life for her nine children when she left Somalia, instead she faces an interminable separation from them as the decision to take a step into creating a new world for her and her family led to a situation from which there is currently no escape.

Homeplus NI has supported Semira, becoming a lifeline and effectively providing a sense of ‘family’ for her for the first time in years.

Then it’s Nazim’s turn to speak and he tells his story with great urgency, eager for us to understand that the life he is living and the person he has become is not something he would ever have chosen, or wish on anyone else.

He describes leaving Algeria at the age of 17, ending up in London. His accent is now a strong mix of the two countries he has called home. Nazim has spent 17 years in the UK – longer than he lived in Algeria. He says his problems only started when he tried to claim asylum as a young man.

As his story unfolds, it’s obvious that what started out as an adventure for a teenager has led to an unending sense of despair on the streets of Belfast.

The rhythm of his speech gathers pace and becomes almost frantic as he urges; “I am no different from any of you, I want to work, I want to belong, I don’t want something for nothing. I have a right to exist too”.

Nazim lost both of his parents in the last six months. He hadn’t seen them since he was 17, the inescapable consequences of the decision he took to leave his homeland now weigh on him heavier than ever.

Homeplus NI are effectively providing Nazim with a literal and figurative lifeline; “If it wasn’t for Homeplus NI and Ryan in particular, I don’t know what I’d do, he has kept me going at a time when things have become so much worse”.

It’s clear from Nazim and Semira’s stories that Homeplus NI is more than just an outreach service, it is providing a level of support and connection above and beyond food and shelter, and at some of the worst times in people’s lives, and it is endeavouring to do what it can to offer a little hope to people who have little to hope for.

We leave Homeplus NI deeply affected by the work of the charity and the stories we have heard, painfully aware of how lucky we are compared to others.

It has been an afternoon few of us will forget as both a demonstration of the value and positive impact of funding and as an encounter with people living in very difficult circumstances who really are no different from us apart from by virtue of birthplace.

*Names have been changed